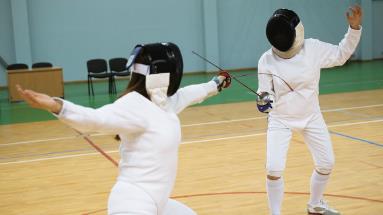 Whenever fencing is mentioned, there would be an immediate association with a valiant fencer with all the equipment or the thrilling exchanges. And yet, how much do you really know about the history and rules of this elegant game?

Origin and development of fencing

The history of fencing goes back a long way. It evolved from soldiers’ sword training in ancient Europe. The first book about fencing techniques was written by a Spanish person, thus Spain is considered the origin of modern fencing. By the end of the 14th Century, fencing had spread to other parts of Europe along with Spanish military expeditions. Into the late 19th Century, fencing associations sprang to life around the world. In 1896, the year of the first modern Olympics, fencing became one of the Olympic sports, which is testament to its popularity.

After several centuries of development, fencing has become a codified sport, and it is categorized into three types according to the weapon.

The foil is the lightest sword of the three, and is most often used by beginners for practise. In order to score, fencers target their opponent’s torso, which is the area below the neck and above the thigh, with the tip of the sword. If both fencers hit their opponents simultaneously, the fencer on offence, that is, the fencer who advanced first and had the priority or the "right of way", scores a point. The fencer on defence has to make a valid defensive movement, a parry, before launching an offense to score.

The Épée is the heaviest of the three. An fencer can score with the tip of blade on all parts of the opponent’s body, therefore this has the largest attack range. In a game of Épée, when both fencers hit each other simultaneously, both fencers would receive a point. Thus, it is equally important to attack and parry as there is no priority of “right of way” or the advantage of being on the offensive side.

The greatest difference between the sabre and the other two is that fencers can also score with the sides of the blade, which is why fencers need good protection for their fingers. As a result, the movements and attacks are swifter and more intense. The target area for a game of Sabre is the torso above the waist, the mask and the arms. The rule of “right of way” also applies to a game of Sabre. Thus, when fencers hit each other simultaneously, the referee would award the point to the fencer who launched the attack first.

The orange area indicates the area for a valid attack to score:

Fencing is an intense and thrilling game. You will have a more engaging experience of the game if you know the basic rules and regulations!

Individual events begin with pool games with 5 to 7 fencers in each group, and they will each try to score 5 points in 3 minutes. Then it will proceed to direct elimination based on the rankings. Each game is divided into 3 periods of 3 minutes each with a 1 minute break in between periods. The winner will be the fencer who is first to score 15 points or has scored more hits than the opponent within the game time.

If there is a tie when the game time is finished, there will be 1 minute extra time under the rule of sudden death, where the first fencer to hit the opponent and score would win the game. Before the extra time, both sides will draw lots to decide who the winner of the game will be if both sides fail to score during the extra time

For team events, the winner will be decided by direct elimination. Both teams are formed of 3 fencers and 1 substitute fencer. Each game have 9 periods of 3 minutes or 5 hits. The three fencers will each take their turn to play and the team that scores 45 points first will win.

Advanced electronic equipment is used to judge in fencing games: both fencers are equipped with a red light and green light sensor. When the fencer hits the opponent, the electronic devices will judge whether the hit is a valid or invalid attack. The equipment will signal with the light of either side if the attack was valid. If the attack was invalid, the equipment will signal with a white light.

Development and promotion of fencing in Hong Kong

Fencing took root in Hong Kong after the Second World War. By the end of the war in 1945, students who returned to Hong Kong after studying abroad introduced the game, and members of the British Army also took part in this. In 1949, the Hong Kong Amateur Fencing Association, the predecessor of the Hong Kong Fencing Association, was established. This later became an affiliate of the International Fencing Federation and the British Empire Fencing Federation (now the Commonwealth Fencing Federation). In the fencing game between Hong Kong, Macau and Japan in 1953, Hong Kong fencers won a sweeping victory, which drew more attention to fencing in Hong Kong. Since then, fencing began to develop in school campuses and the inter-school fencing competition, which involved fencers from different schools, was first held in 1960. With the steady development of fencing in Hong Kong, the Hong Kong fencing team also obtained excellent results in international games. The team won 2 silver medals and 5 bronze medals in the 2010 Guangzhou Asian Games and 8 bronze medals in the 2014 Incheon Asian Games.

Fencing requires good fitness, quick reflexes, technique, fast reaction times and a high degree of concentration. It is also immensely helpful in training balance, hand-eye coordination and responsiveness. The Hong Kong Fencing Association is dedicated to promoting the development of fencing in Hong Kong. With the sponsorship of the Leisure and Cultural Services Department, the HKFA established community sports clubs and holds regular fencing classes to give the public a change to try fencing.

If you are interested in joining a fencing course, please consult the webpage of the Hong Kong Fencing Association (www.hkfa.org.hk) or call the staff at 25048106 for more details.