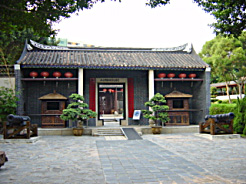 Located in the centre of the Park, the Yamen is a declared monument and serves as the Park's office. In 1847, when the walled, garrison city was finished, its interior was dominated by the offices of the Commodore of the Dapeng Brigade and the Kowloon Assistant Military Inspectorate, commonly known as the Yamen, or headquarters.

The Yamen is the only building that remains of the Walled City. It was designed in the architectural style of southern China, with three rows and four wings of houses. Its walls and column bases are built of brick and granite, while the roof is a traditional structure crafted of China fir and covered with cylindrical and flat tiles. The word "almshouse" was engraved over the front door of the Yamen, signifying that it had been used as a home for the aged.

The centre and focal point of the Park, the Yamen is surrounded by floral paths and traditional Chinese pavilions, all named after Walled City buildings and streets. Longjin Road, Longcheng Road, Longjin Way, Xicheng Road, Guangming Lane and Guangming Road are, in fact, original street names from the 1950s. At the time, crime was rampant in the living maze that was the Walled City. The literal meaning of "Guangming" is "brightness" or "light." Ironically, it is an apt description, since many of the city's drug addicts kept their lamps lit day and night for taking opium.

Inside the Yamen, you can find stone tablets relating to the Walled City, including the Chinese characters for "mo yuan" (ink and paper) and "shou" (long life), written by Chang Yutang. The kan ke hui yi, a record of the meetings for the duty roster and wages paid to the troops of Yamen, is also shown. It was inscribed in 1886, the 12th year of the reign of Qing Dynasty Emperor Guangxu. Photos of the Walled City, as well as drawings and essays related to the creation of Kowloon Walled City Park, are prominently displayed.

Two cannons are positioned at either end of the Yamen's front yard. Made in 1802, during the reign of Qing Dynasty Emperor Jiaqing, the cannons show that the Qing Government attached considerable importance to border defence.